What's Next for the Vanguard's Very Big Problem Campaign?

For the next five months, EQAT and the Philly network will be using creative actions and social media to highlight the harm Vanguard investments are doing in our region and beyond.

Please put the April 18-22 walk in your calendar now! 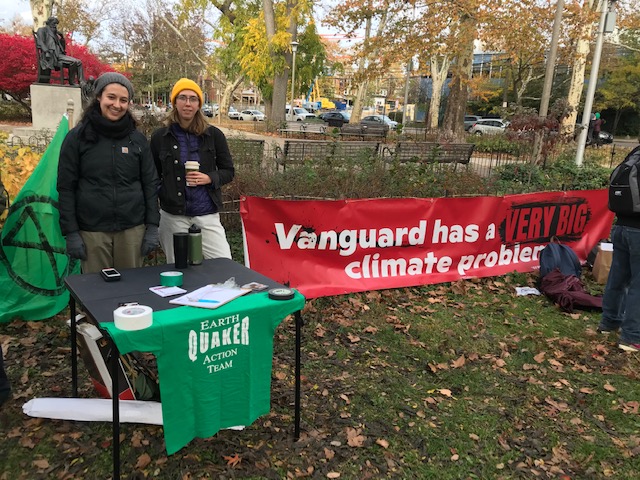 Between now and then, we will have at least one action a month spread across our region.

The next one will be Dec 17, 2pm, at Southwark Generating Station, 2501 S Delaware Ave, Philadelphia. There is parking on site. RSVP here.

Vanguard is the largest investor in Exelon, which owns Southwark along with several other generating stations along the Delaware River. The property is dominated by the decrepit World-War- II-era plant, which is now inoperative. For years during our Power Local Green Jobs campaign, Exelon subsidiary Peco told us they couldn’t find land in Philadelphia on which to install solar panels, while this riverside property could be capturing sunlight. Instead a portion of the property houses a newer oil generator that contributes to climate change whenever it is cranked up during time of peak load. Both parts of the property are symbolic of the old, dirty energy economy that we need to replace.

How does this relate to Vanguard? Too many of Vanguard's investments are in companies that are stuck in the past, while Vanguard claims to be protecting its customers' futures.

A major goal of this action will be upping our social media game to show a wider number of people the outdated infrastructure Vanguard is invested in. We’d love for you to attend the action, but if you can’t, please amplify it on Facebook, Instagram, or Twitter. Please use the hashtag #VanguardsVeryBigProblem.

Hope to see you there!