Malvern - Today, hundreds of members of an interfaith group including elders, students, and Vanguard customers protested at the headquarters of the Malvern-based asset manager, demanding Vanguard use its influence over companies it invests in to tackle climate change and reduce fossil fuel dependence. Organized by local organization Earth Quaker Action Team in collaboration with other groups including Power, Dayenu Drexel, Dayenu Penn, XR Philly, 350 Philly, and Elders Action Network, the Earth Day protest was the culminating event of a 5-day, 40 mile walk from Chester to Malvern, tracing the money pipeline upstream from neighborhoods impacted by climate change and pollution to the headquarters of the asset manager, which manages $8.1 trillion on behalf of customers around the world. 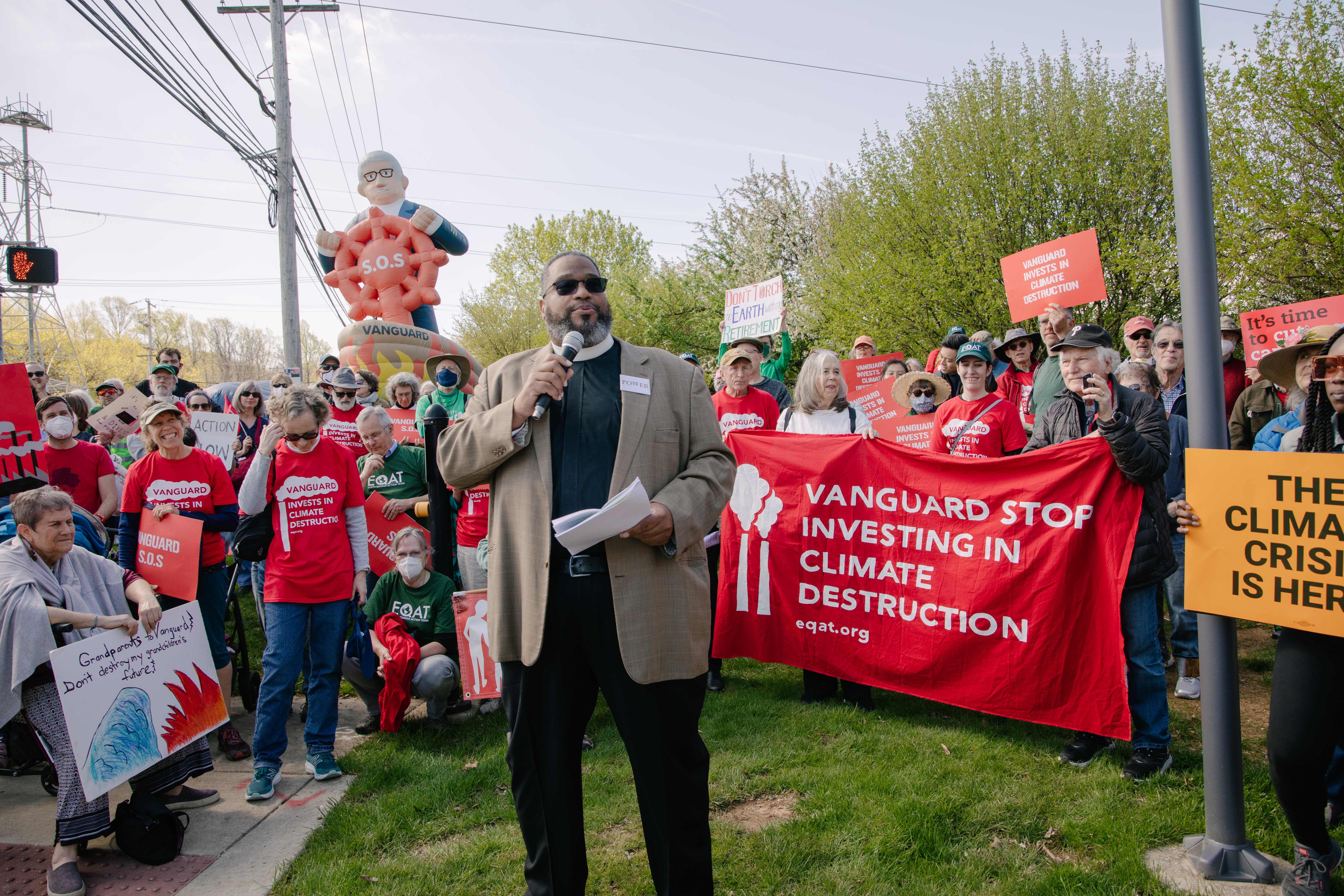 “Vanguard must commit to decarbonize its entire portfolio by pushing the highest carbon emitters to design and implement a just plan to align their business model to a 1.5 degree future,” said EQAT campaign director Eileen Flanagan. “Pennsylvanians who live and breathe the pollution from these companies across our region are already suffering enough, and scientists agree we are in a climate emergency. Vanguard is running out of time.”

Beginning Monday, the group journeyed through frontline neighborhoods where heavy-polluting industries built along lower-income areas of the Delaware have led to higher rates of asthma and cancer. Speaking in front of the Covanta trash incinerator that Vanguard held shares in for decades, Zulene Mayfield from Chester Residents Concerned for Quality Living pointed out how money invested in these industries harms local residents. “My neighbors are being told by their doctors not to open their windows because the air here is so toxic.” Early in the week, walkers also heard from Eastwick Friends and Neighbors about increasing instances of extreme flooding in the region due to climate change.

Midweek walkers joined Exodus Alliance and high schoolers in a sidewalk seder calling out “climate pharaohs” at a Wayne branch of Chase Bank, a company that funds extraction projects and in which Vanguard is the largest investor. The next day, the group delivered flowers and a letter signed by over 100 organizations to the home of Vanguard CEO Tim Buckley demanding the company reshape its finance investment strategy to tackle its climate problem. By the end of Friday’s action, nearly 300 people had participated in the five-day event.

In early April, the International Panel on Climate Change announced that, in order to keep average global temperatures from rising more than 1.5 degrees, greenhouse gas emissions must peak by 2025, be halved by 2030, and stop by 2050. As of 2021 Vanguard had over $300 billion in fossil fuel exposure, and it actually increased its coal investments to $101 billion, making it one of the world’s largest investors in the coal industry. Vanguard has more than $1.5 billion invested in mining companies alone that are violating Indigenous rights in the Brazilian Amazon. Vanguard lags far behind its peers in climate-related action, according to Reclaim Finance, receiving a 0 out of 30 in a scorecard ranking 30 major asset managers on their climate commitments.

With volunteers from across the greater Philadelphia region, Earth Quaker Action Team’s walk is a part of the larger Vanguard S.O.S. campaign, which include groups like the Sierra Club, Amazon Watch, Acre, Reclaim Finance, Sunrise Project, and others. The campaign follows a similar effort targeting BlackRock, which has made public moves toward more active engagement in line with climate science, although like Vanguard, it remains a committed investor in oil, coal, gas, and other companies driving deforestation.

The detailed explanation of the solutions Vanguard S.O.S. is calling for can be seen here: https://vanguard-sos.org/wp-content/uploads/2022/04/VanguardSOS-Demands.pdf

Photos and other resources are available here:
https://drive.google.com/drive/folders/1QXbalSAyZsY8ohJeEobg_u8n6V2xhZo-?usp=sharing