Runners urge PECO to join the race to solar

PHILADELPHIA- A hundred runners and walkers did laps around PECO’s Market Street headquarters on Saturday, October 1st, saying that PECO has been giving a “run-around” to delay a transition to solar energy and a major increase in green jobs. The protest continues the Power Local Green Jobs campaign for 20% local solar by 2025. 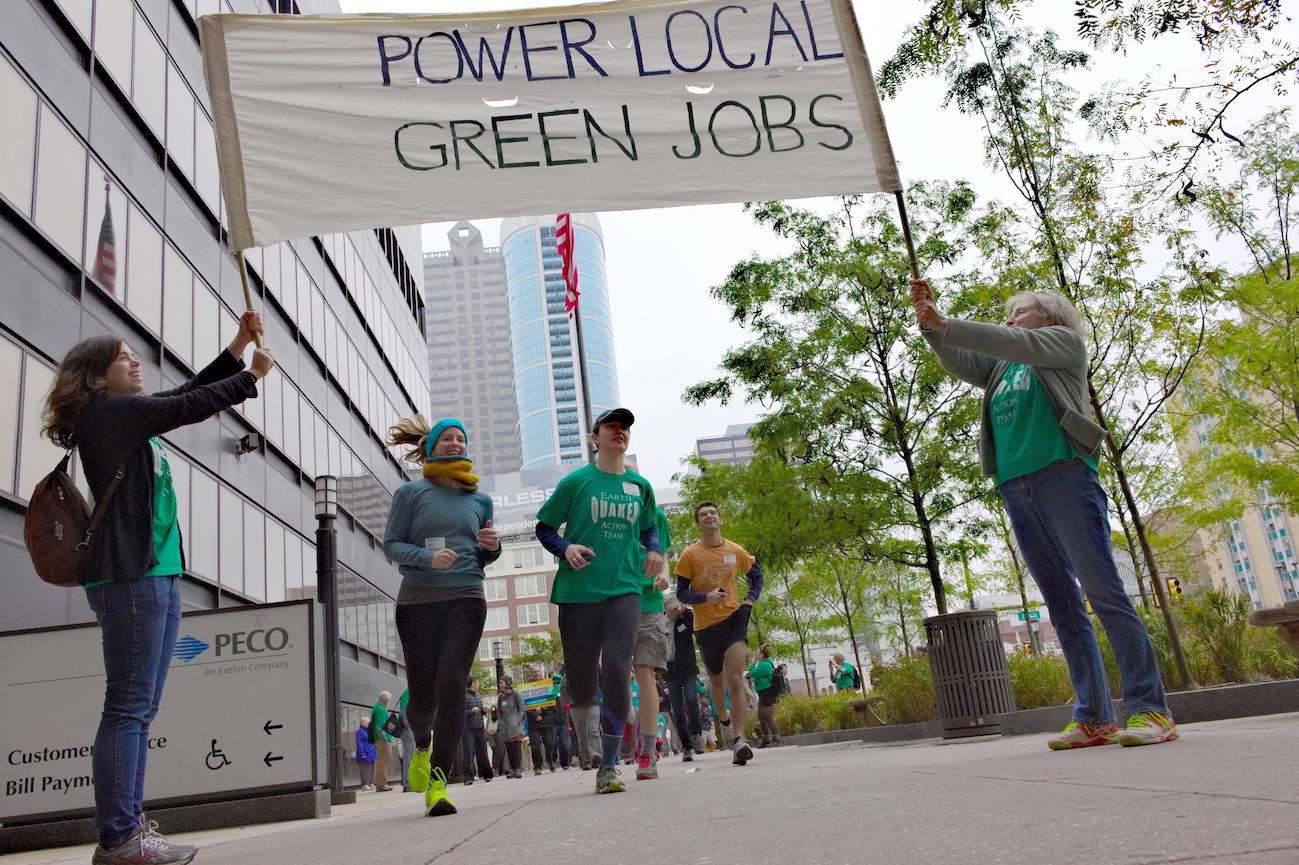 PECO, the state’s largest electric utility, has largely opposed pro-solar legislation and has been notoriously difficult for solar installers, electricians, and customers to work with. By contrast, the interfaith campaign has called green jobs a moral issue, citing wide unemployment, the health care costs of air pollution, and the devastation of climate change as issues disproportionately hitting low income communities and communities of color.

After a year of monthly demonstrations, PECO floated concept programs last week that would direct customer donations to low-income solar projects and purchase solar energy locally. PECO only relies on solar for 0.25% of its energy, the minimum required by law. These programs could be important steps if coupled with a larger commitment, but as isolated programs they won’t reduce PECO’s planet-heating emissions.

Pastor Melanie DeBouse, interim Co-Executive Director of POWER (Philadelphians Organized to Witness, Empower and Rebuild), spoke about what solar could mean for those in her congregation with limited incomes. “[PECO’s short-term fixes] are a smokescreen. We are asking PECO to implement the processes so that our citizens can benefit from something God has given to all.”

Over the past few years, PECO has frustrated the efforts of homeowners who want to put solar panels on their roofs. In some areas, 30% of solar applications have been denied outright by PECO, while others have been delayed for many months. PECO has made it so challenging for solar installers to do their jobs that some are commuting out of state to get jobs, although the company says it is now working to solve these problems. Pennsylvania currently ranks 40th in solar jobs for its population.

“We can’t have another 20 years of burning dirty fuel,” said Eileen Flanagan, of Earth Quaker Action Team. ”We could be powering our region with clean energy produced right here, in communities that need jobs now. We are calling on PECO to be a real leader in the transition to a just and sustainable economy.”

POWER (Philadelphians Organized to Witness Empower and Rebuild) is an interfaith organization committed to implementing systemic change for the betterment of Pennsylvania. We represent over 60 congregations from across the Greater Philadelphia area, transcending borders of race, faith, income level, and neighborhood. Learn more at www.powerinterfaith.org.