Outside the Exelon shareholders meeting:

“Under the gaze of Delaware’s iconic figure, Caesar Rodney, 16 people gathered for the outside action of EQAT’s Exelon Shareholders Meeting. On this beautiful last day of April, we sipped beverages and ate muffins while gathering round to strategize how to distribute copies of PECO’S Report Card to shareholders. Our hope was to get their attention before they entered the Hotel Dupont across the street. It made me especially proud to share the role of action lead for this event because Wilmington is where I’ve lived all my adult life. After traveling Philly on a regular basis these past eight years, I was delighted to host this action right here in Wilmington.

We displayed our giant report card and pie graphs, props that helped us tell our story - that as PECO’s parent company, Exelon has to take care of PECO’s failing grade in transitioning to sustainable solar power and clean air. As we sang and did our street speaking, we knew we were mirroring the same message as our EQAT Friends on the inside. Our spiritual and physical support for them and for ourselves kept us on the move and focused.

As we gathered at the front door of the Hotel Dupont we hit unexpected roadblocks some of which included police pressure to not “crowd” the hotel entrance and light foot traffic. However, our training has taught us to be nimble so we walked around the block and displayed all our signage to Wilmington-ians on Market Street.

We sang, we spoke. We gave space, energy, and our spirits a message as we waited to hear from our insiders.

And when our Friends joined as sometime after 10:00, they told us a surprising tale of the meeting’s Q&A and Exelon acknowledgments. Exelon seemed to change their business-as-usual model of a shareholders meeting just for us!”

Inside the Exelon shareholders meeting:

These excerpts were taken from Eileen Flanagan's blog

Please be sure to read Eileen’s full blog post, here!

“Yesterday morning I put on my nicest business dress, a little bit of mascara and joined Earth Quaker Action Team in Wilmington, DE for the annual shareholder meeting of Exelon, the parent company of our electric utility, PECO. We came to disrupt business as usual with the message that PECO is failing to transition to a just and sustainable energy future, and as the responsible parent, Exelon needed to address PECO’s poor performance. My role was action lead, the person who grounded the group at the beginning and decided when to leave the meeting, since getting arrested out of state was not part of the plan.

While a larger group outside rallied and sang, seven of us went inside the hotel conference room where Exelon executives, board members, and shareholders were gathering. We had planned who would speak and in what order. We had a script and a few signs. We also knew that direct action is unpredictable, so I had encouraged people to trust their inner guidance, God, or whatever they believed in as they figured out when to stand up to say their lines from different parts of the room.

I was glad I had said this, as things did not go quite as expected.

Long story short, Exelon had planned for our presence, sprinkling several Q & A opportunities throughout the meeting. When the first EQAT member, Carolyn McCoy, rose to deliver her message, the board chair asked her to just wait a minute and use the microphone, which had been positioned in the center aisle. It seemed to me this was meant to create a dilemma for us: either follow their rules, or look completely unreasonable, as they positioned themselves as the reasonable people.

It was a smart move on their part. Perhaps they had talked to PNC executives and heard how that company shut down its annual shareholder meeting two years in a row because of our presence, a move that definitely made PNC look unreasonable. What I loved about our group’s response to Exelon was the way we all stayed faithful to EQAT’s rebel mission (see this video, if you’re not sure what I mean) while seizing the opportunity to get more air time at the meeting than we had expected.

While most of us still gave brief messages that were disruptive, we also came up to the microphone and in many cases rebutted things the CEO said in a tone that was clear, present, and powerful. At one point someone—I can’t remember if it was the CEO or the board chair—made a comment about us shouting, and former schoolteacher Laura Jackson said, “We aren’t shouting. Don’t say that. It’s disrespectful and dismissive.” A shareholder activist from DC who took the mic later agreed with Laura.

We got a surprising amount of engagement from the CEO, who said he shared our concerns about climate change and recognized that the future was bleak. He also invited us to meet with them and then said that he’d even meet with us himself—a notable contrast to early in the campaign when even PECO’s CEO refused to meet with us. (Three and a half years of being a pain in the a-- has its perks.) Instead of standing up and walking out of the meeting, as we had originally planned, it felt right for us to stay to the end, though we still walked out singing as a group.” 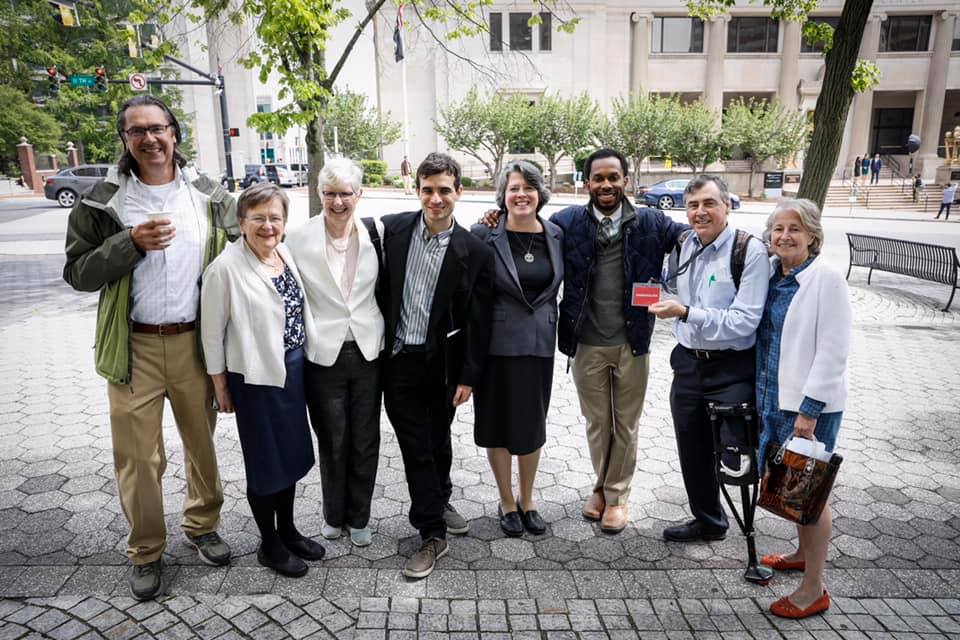