At my first worshipful action at PECO, I joined the circle of worshipers and tried to tune into spirit but it was really hard, almost impossible. My eyes darted around the lobby as a steady flow of people came in and out of the revolving doors. Everyone had to scan a badge as they passed through the lobby. Security personnel were taking pictures of us and alerting someone higher up that “EQAT is in the lobby.” As I watched, one of the guards moved a partition around our group, boxing us in.

I also watched in amazement as many of the other friends closed their eyes and held the silent peace. 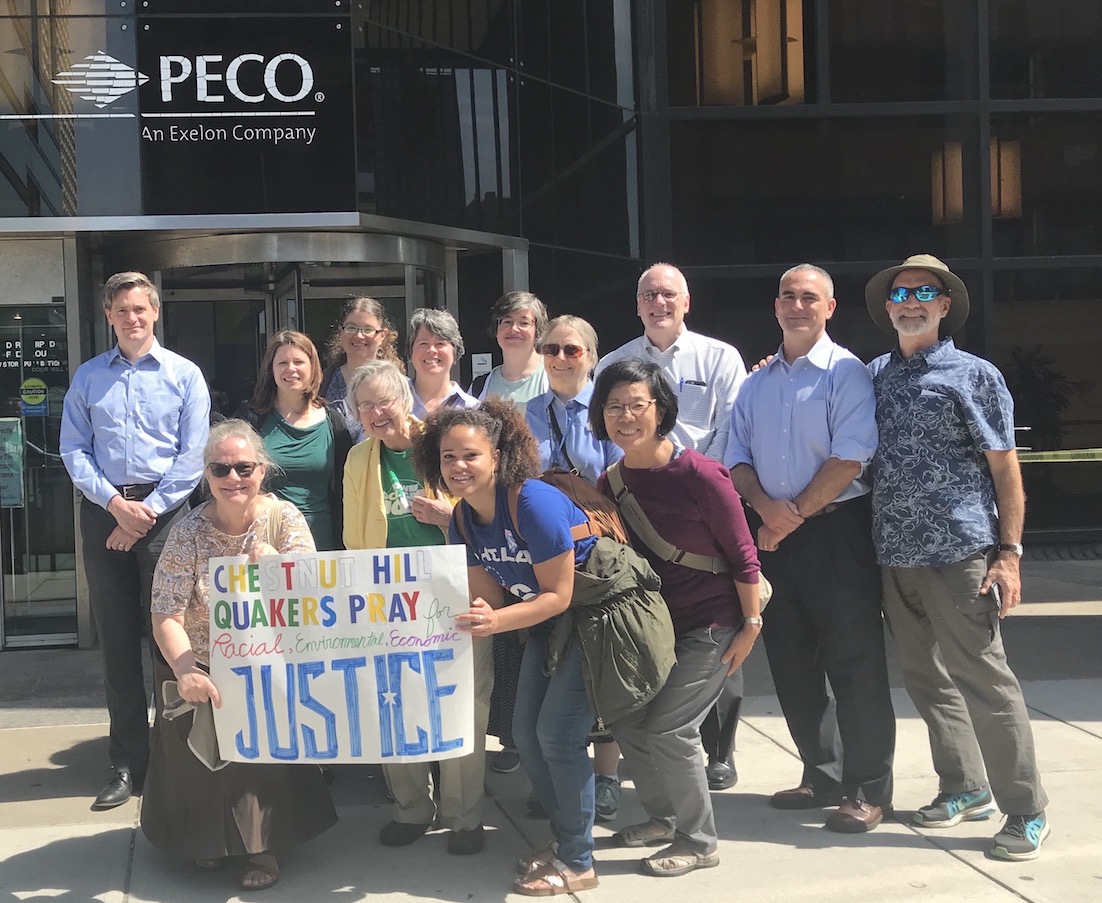 On May 21, I had the opportunity to participate in the Earth Quaker Action Team Meeting for Worship at PECO headquarters. I have always identified as an environmental activist and as a Quaker. This past Monday, I had the opportunity to join fellow friends from Chestnut Hill Friends Meeting (CHFM) in combining both of those identities. CHFM, and EQAT are urging PECO to invest in more sustainable sources of energy to power Philadelphia, in addition to being more accountable to the neighborhoods in this city that are underemployed.

The group planed to meet at 30th street station at 9:30 am and then walk over to PECO head quarters, just across the Schuylkill River. I, however, was running late. I didn’t have to work on Monday, which allowed me to attend the demonstration but also allowed me to oversleep :) Although I enjoyed my extra REM cycle, it meant that by the time I got to join the group, they were already standing to one side of the PECO lobby, formed in a circle. I watched the comings and goings of the PECO lobby for pretty much the entire duration of the meeting for worship. Being in such a busy, new space was unsettling to me, and I didn’t feel that I could close my eyes and truly tune out the bustle that was going on outside of our worship circle. When I showed up a little late that morning, it meant that I missed out on the grounding exercise and run through of the events that were about to happen. I realize now that those actions would have greatly helped me relax and worship for the future of PECO and the citizens of Philadelphia.

At the rise of the worship, friends were invited to share joys and sorrows, in the same tradition that occurs at CHFM on Sundays. We exited the building singing a hymnal that felt heavy with discernment and hope. Everyone watched as we left, looking relieved as we walked back out of the revolving doors. I guess I felt relief too. I was relieved that nobody was hurt, that we were not asked to leave, and that I got to experienced my first public meeting for worship with attention to environmental and racial justice for the city of Philadelphia.

After the demonstration I ended up at a bookstore browsing through a book that contained pictures of Philadelphia at the turn of the century. Coincidentally enough there was a picture of the original PECO building on Delaware Ave, it is a gigantic cement and metal coliseum with shoots and ladders towering above everything else in the landscape. The structure still sits there, a vacant pile of rust and distrust. The placement of the original PECO building is what struck me as a coincidence because it stands directly next to Penn Treaty Park, which memorializes the place where William Penn first met with the Lenni Lanape Natives of the Philadelphia region. I feel that Quakers in this region have an obligation to honor Mother Earth and the original health and beauty of the land. I feel proud to be a member of Chestnut Hill Friends Meeting and empowered to help move PECO towards the future of Philly Power.