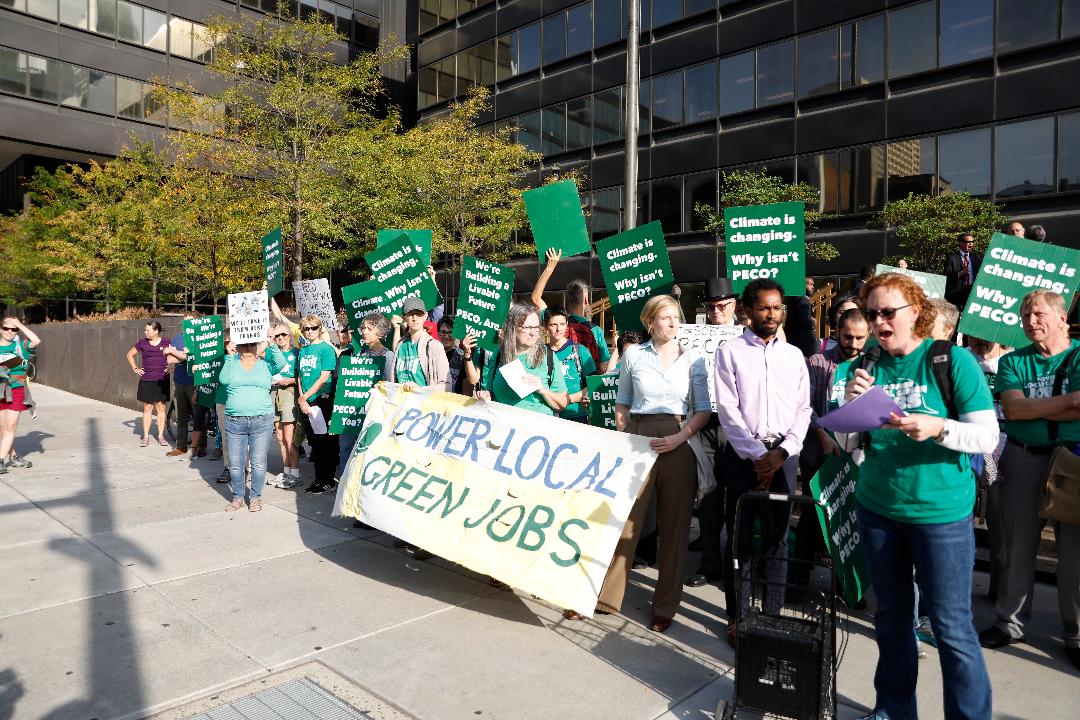 “We are here in love.   And hard love for PECO.” Monty spoke out of a silent centering time as our feet held down the huge banner on the sidewalk in front of the PECO building ‘Climate is changing.  Why isn’t PECO?’ I held in my heart and in love my two toddler-age grandsons. And tears came as I wondered about, and feared, for their future.

EQAT set September 26 as the day to demand an answer from PECO about their specific plans to address climate change.  What was PECO doing to change to 20% solar energy by 2025? Surrounded by police, those risking arrest climbed the steps to the edge of the PECO plaza to ask that question. We, on the sidewalk, heard them singing, and Ingrid led us as we joined in.

The whole group sang together as we walked back at 30th Street station to debrief and share our experiences of the morning,   Carolyn, one of our two police liaisons, told us she heard a policeman sigh, “I don’t want to arrest these folks.” Nobody was arrested this morning, and we made our voices heard.

“We came in joy and love and defiance.” For me, that debrief remark summarized  this morning’s action, and our ongoing work in EQAT.

I’d left my house in the dark, noting the early autumn’s starry sky, but now as I stood on the train platform there was a growing lightness to the east.  The Beatles’ song “Here Comes the Sun” came into my mind, so I started singing, and my partner quickly pointed out it was the perfect song for that day: Visiting PECO to check in on its progress (or lack thereof) towards local solar energy and job creation.  It felt like a fortuitous beginning to the day.

Arriving at 30th Street Station in Philadelphia, just a few blocks from PECO, there was a bubbling sense of urgency and energy as other people began to arrive in their green EQAT shirts.  With the action following on the heels of the Youth Climate Strike it felt particularly important to show up for youth, but also for people of all ages, like this would be part of our collective legacy.

We processed the several blocks to PECO’s headquarters and were met with a stark reminder of PECO’s belief that it is a private corporation unaccountable to ratepayers when we saw that the plaza — formerly open to the public — was cordoned off and additionally blocked with of all things bicycles, a sustainable transportation option.  The bicycles belonged to the police who were more than ready to greet us and prevent us from approaching the building and its occupants with our statement and question: “The climate is changing. Why isn’t PECO?”

As the morning progressed and those willing to risk arrest had to creatively rethink their strategies given the blockage of the plaza, those of us on the sidewalk were able to repeatedly and loudly say, “The climate is changing.  Why isn’t PECO?” Confronting PECO and the forces its executives use to prevent their accountability felt powerful, but also personally challenging; however, being there together made what could be scary seem manageable and fulfilling.

Returning afterwards to 30th Street Station I felt fulfilled, strengthened, and confident.  I did something which wasn’t natural or easy for me, but I stretched to meet the challenge and felt others stretching with me.  To paraphrase “Here Comes the Sun”, we were indeed the sun and we were all right. 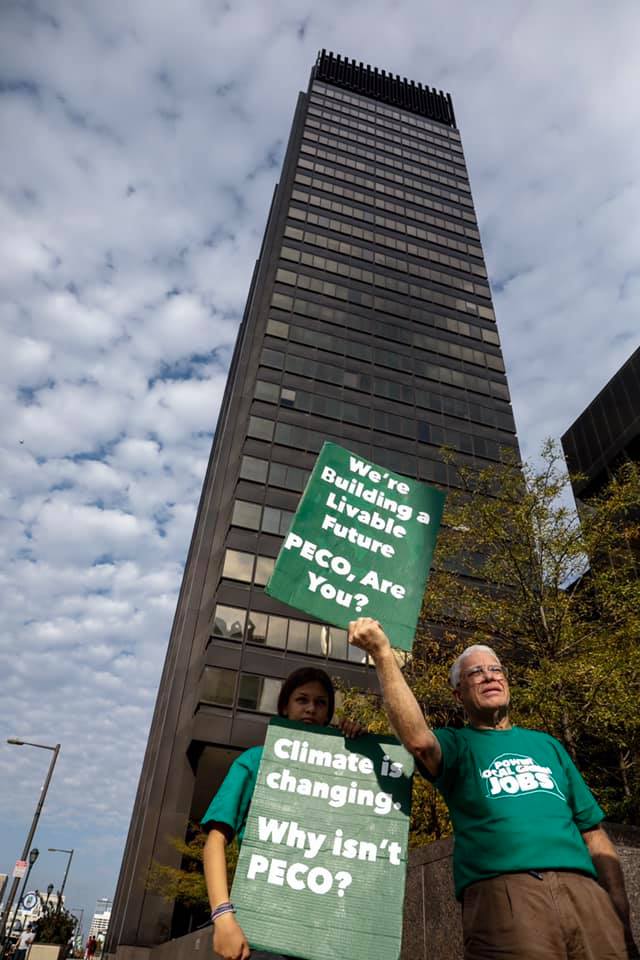