On hottest day of the year, climate-justice group asks: “Climate is changing, why isn’t PECO?”

This week, in the midst of a heat emergency, Earth Quaker Action Team (EQAT) publicly demanded in two different protest actions to know why PECO, and its parent company Exelon, has failed to take bold action on the climate crisis by creating local solar jobs.

“The city is boiling, and potentially deadly heat waves like this are becoming more common while PECO avoids a major shift to solar energy. We need PECO to stop dragging its feet and harness the tremendous power of the sun to fight climate change and strengthen our communities,” said EQAT board member Kaytee Ray-Riek.

During the afternoon rush hour, EQAT dropped a 50ft banner from the west-side roof edge of PECO’s HQ building on Market Street. Visible to commuters in the 30th Street Station corridor, the EQAT banner posed an urgent question the region’s citizens want answered: “Climate Is Changing: Why Isn’t PECO?” Three EQAT members were arrested and taken to a nearby police station. 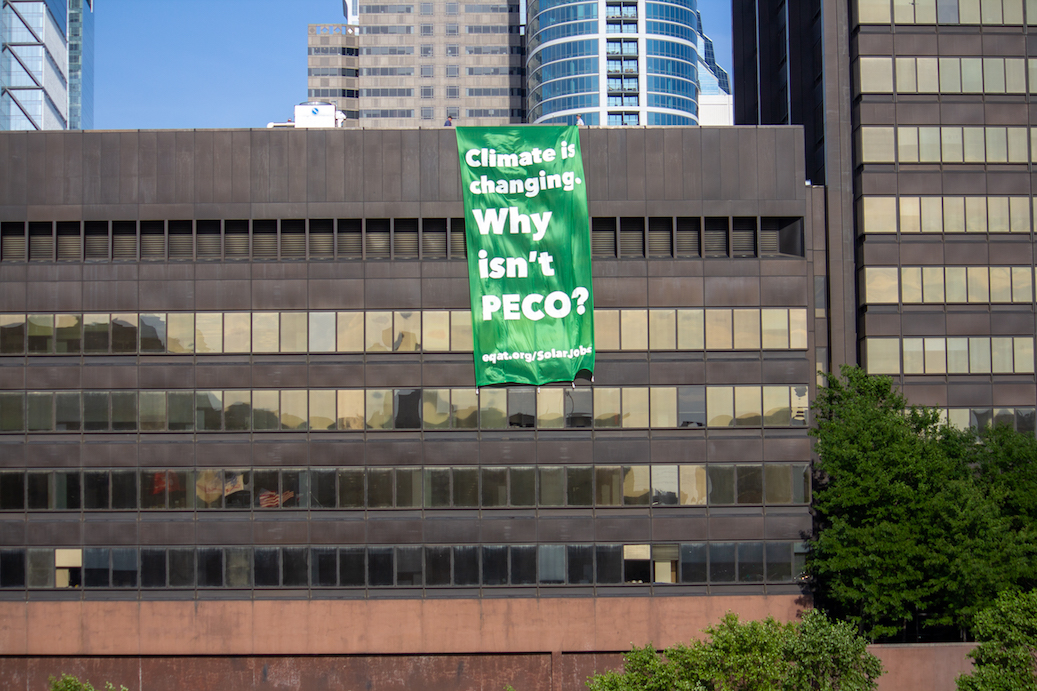 Late last month, amidst the smoke from the PES’s refinery fire and dismay over its announced lay-offs, EQAT members met with PECO CEO Mike Innocenzo to reiterate their call for the Exelon-owned company to source 20% local solar by 2025. Mr. Innocenzo refused to envision a clean-energy future for the Philly metro area in which PECO partners with homeowners and businesses to expand rooftop solar capacity while creating well-paying jobs in the city’s low-income neighborhoods and suburban towns such as Coatesville.

After the meeting with PECO leadership, EQAT campaign director Tabitha Skervin said: “Mike Innocenzo appears more interested in protecting short-term profits than in aligning PECO with the long-term interests of our region’s residents. We see PES’s refinery in ashes, its workers holding pink slips, and our kids coughing on bad air today and tomorrow as PECO procrastinates. Now is the time for PECO, and its parent company Exelon, to invest major resources into bringing jobs that advance a democratic, renewable, and equitable energy economy - particularly in communities of color within its service area.”

The rally on Tuesday in Coatesville spotlighted what PECO-Exelon could accomplish if it took some of the one million dollars a day in profits it makes from local operations and invested in long-term green jobs programs. Featured speakers included State Rep Dan Williams, Stephen Reynolds from Solar City, and Alvin Herring from Family Service of Chester County. Marc Brier, an EQAT volunteer and rally emcee, said: “Working class communities like Coatesville are being whipsawed by economic forces that send manufacturing jobs elsewhere. We need something that sends the jobs of the future our way. Coatesville needs to be part of the coming transition to a renewables-based energy economy.”

Commenting on Wednesday’s banner drop, EQAT activist Walter Sullivan said: “Hiding underneath PECO’s green roof is an irresponsibly minimal effort on clean energy sourcing. Climate scientists have made it clear we can’t afford PECO-Exelon’s predatory delay any longer. This for-profit corporation and its leaders should be answerable to the public and answer the burning question our banner poses: Why isn’t PECO acting as a community change leader in response to the climate crisis? Where is the serious commitment to creation of well-paying solar jobs?”