The result of the 2016 presidential election has spurred many people to step beyond their old definition of “good citizen” to become active for change. This presents a challenge: how can movements provide more volunteer opportunities to do meaningful, empowering work, and how can the newly active gain the skills they need? 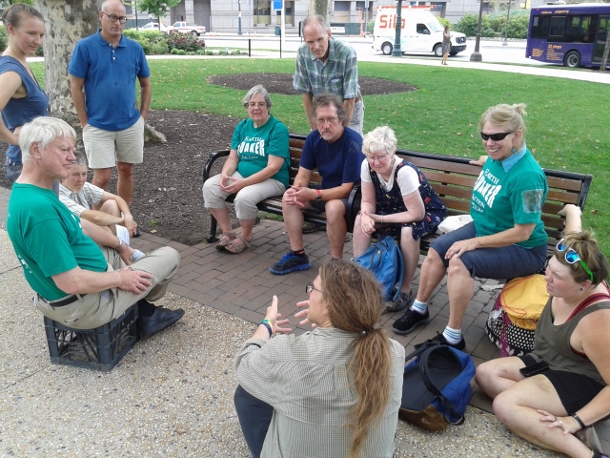 Earth Quaker Action Team, or EQAT, has been having success with a method it calls the “core team.” It evolved the method under the pressure of a rapidly-growing campaign to force the nation’s seventh largest bank into ending its financing of mountaintop removal coal mining in Appalachia. In 2016, EQAT dramatically increased its demonstrations, increased its geographical scope through regional trainings, and then held simultaneous actions in multiple states, leading to victory.

The core team structure was a big part of that victory. It helped EQAT to work more efficiently by responding rapidly to needs, giving people immediate and specific experiences in leadership, preventing burnout by the campaign’s “veterans,” and bringing people with many previously-acquired skill sets together for a specific, short-term purpose.

Like food, organizational structures are better when shared, so I’m writing this as a progress report from the field, hoping that our experience might benefit others.

Ana was brand new to EQAT, having only come to one or two general body meetings, but she allowed herself to be convinced to join a team planning a multi-state day of action. Maurice was an EQAT veteran, but hadn’t been on a core team in quite a while. Susan was deeply involved in the campaign and had been on a core team leading up to this one, sat on the board, and brought an overview of the history of the campaign. Jeremy was the staff person, looking out for the big picture, watching group process and finding the resources the team needed.

The team met for the first time in Maurice’s house, spending extra time settling in and helping Ana feel at home. To begin, Susan, the experienced volunteer, gave an overview of the campaign to frame the task in front of the core team, including what the core team was responsible for, and what it wasn’t doing. For example, the core team was not responsible for following up with participants more than a week after the action — other groups were taking care of that — but was tasked with recruiting and supporting as many actions in as many different places as possible. Jeremy, the staff organizer, with his big picture view, helped clarify and guide when Susan got off track.

The team continued to meet about once a week for the next month and a half, reporting back to one another about recruitment goals, challenging questions that participants had raised that the team member didn’t know how to answer, and how their new idea was working out for setting up coaches for each action. In each meeting, the team members troubleshot things that had come up between meetings, checked in on their progress and set goals and distributed work to be done before the next meeting, and Jeremy reported back on any feedback or suggestions from the staff.

Each meeting started by lingering over tea in the kitchen and ended with informal time spent joking, talking and sharing stories. As the day of action moved closer, the team met more frequently, sometimes multiple times a week. Team members stayed connected by calling one another for support on things that came up between meetings.

In the end, this small but mighty group coordinated what up until then was perhaps the largest coordinated day of action at bank branches in U.S. history. The core team of three volunteers and one staff member organized logistics, recruited action leads — many of whom were leading an action for the first time — coordinated a team of volunteer coaches to work with the action leads one on one, delegated media work, and hosted debrief calls with all of the leaders. It was one of the most complicated actions EQAT had ever pulled off, and it was made possible through the core team model with its small and tight group of volunteers supported by staff, based in relationship and sharing information.

While this was a very complex action, core teams can also be helpful for planning and implementing smaller and simpler, garden-variety actions.

What is a core team, exactly?

A core team is a small group of volunteers assigned to tackle one specific project in a short amount of time. Usually composed of four to five volunteers with dedicated staff support, the team plans actions or a coordinated group of actions. Sometimes, these core teams guide group processes, such as choosing a new campaign or hiring a staff member. Whatever the goal, core teams work on a project that drives the campaign forward. 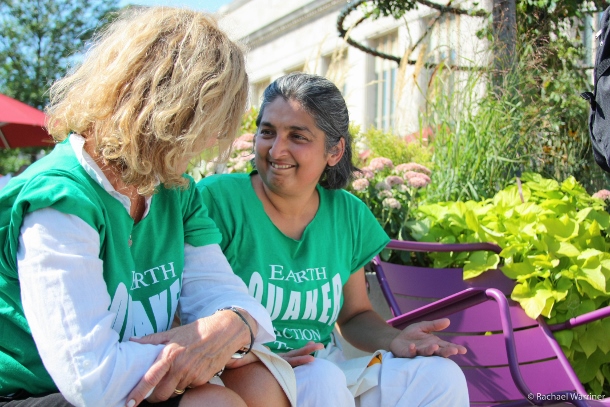 During its first meeting, the core team hones in on its mission and also identifies how each member wants to learn as an individual through the process. We’ve found that getting on the same page at the beginning is imperative for success and satisfaction for its members.

Core teams are not committees. There are three main differences: how people join them, intentional leadership development and timeline.

Whereas many committees have open calls for members, we intentionally invite specific volunteers to join core teams. We look for people who might have good chemistry together, who can learn from each other. Successful core teams contain members that are both more and less experienced, and can give a lot of capacity to the project.

Unlike committees, core teams are designed for leadership development. Committees often have a chair that runs the meeting and delegates the work. Core teams operate collaboratively and members hold each other accountable, often switching off meeting facilitation. This means that newer volunteers can try on roles for just a meeting or two, with mentorship from teammates.

The most important difference between committees and core teams is the level of commitment over time. In many organizations, committee membership demands a small amount of effort each week over a long period of time. Core teams, on the other hand, are intensive but time-limited. Members are expected to spend a significant amount of time on the team and its work, but only for four to 12 weeks. We often think of core teams as sprints rather than marathons.

What are the benefits of core teams?

In addition to intentionally developing leadership, core teams can increase the organization’s capacity and help build trusting relationships among volunteers.

At their best, core teams hum along with small interventions from an outside staff member or experienced volunteer, allowing a mid-sized organization like EQAT to pull off large actions and powerful campaigns with a small amount of staff time and very little volunteer burnout. We are consistently surprised that a small core team can get so much done.

Because people spend hours together each week in meetings — getting beers after strategizing, drinking tea together, telling jokes, sharing stories and planning — they get to know one another and develop rituals. Building trust over these small things comes in handy when we’re called to take riskier action together in the street or in a corporate office.

Tips for setting up core teams

It’s a rare group that needs no outside help or perspective while diving deep into the details of an action or event. We have found that all core teams benefit from checking in with someone on staff who has their eye on the big picture of the campaign, and we have found it is helpful to have the staff member take the initiative to check in. Asking the core team how they are doing allows the team to identify where they need help. Additionally, we have found it pays off over the long run to have a staff member join the core team’s initial meeting to help frame the task in the larger campaign picture, set expectations and clarify goals.

One trap we’ve fallen into is to think a core team can do it all by themselves. Actually, a core team leads an effort. They need to feel empowered to ask for help from staff and other volunteers. Sometimes that can feel like a lot of energy is going toward supporting a core team, however, investing in core teams pays off in committed, supported, growing, and learning volunteers and high functioning groups.

Ryan Leitner is an activist, organizer and trainer based in Philadelphia. As a board member of Earth Quaker Action Team, they are campaigning to create local jobs by pressuring their electric company to buy solar power from the region.