Today in the early morning light, I headed over to a small interfaith breakfast with Bernie Sanders. Electoral politics is not where I focus my political energy, but I’ve been inspired by the crowds of people standing up against corporate greed and for human dignity. This morning was no different, by the time Senator Sanders entered the room we were all on our feet. 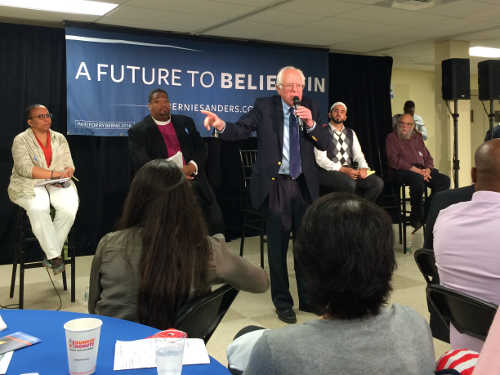 He came out alongside a panel of faith leaders from across the city of Philadelphia. As each of them made an introduction, I realized that half of the faith leaders on stage are supporting the POWER LOCAL GREEN JOBS campaign! Something great is happening in our world, and EQAT is right in that wave.

Today PECO announced a new Solar Stakeholder Collaborative, bringing together "customer advocates, public officials, competitive electric suppliers, solar supporters, and other interested partners”, including EQAT, to "advance local solar energy." Just days before the May 2 deadline for a decision, and six weeks after POWER brought sixty more congregations throughout the region to the call for green jobs in North Philadelphia, PECO made a step in the right direction. We know they would not be starting this process without the dozen actions we’ve done so far, because otherwise they would have announced the collaborative when we met with them in September.

This is why I am ready to Celebrate AND Escalate on May 10. In 8-months we’ve accomplished a lot in this campaign, and yet PECO’s first step does not create a single job in North Philadelphia. Today, sitting beside Bernie Sanders, were Rev. Bishop Dwayne Royster of POWER and Rabbi Arthur Waskow of the Shalom Center. On May 10 they will both be at our action. I hope you will be there too.