Philadelphia - Today, July 22, members of Earth Quaker Action Team (EQAT) braved the scorching heat to remind Philadelphians that our unusually high temperatures are not a fluke, but the predicted result of business as usual. A thermometer showed 103 degrees as they stood on the South Street bridge, holding a red and white banner that said, “Vanguard invests in climate destruction.”

“As my one-year-old fell faint in the morning heat yesterday, I was reminded of the deadly stakes of Vanguard’s climate failures,” said Monty Ogden, EQAT board member. “I’m out here today as a new father calling on Vanguard to change course.”

As of a 2021 publication, Vanguard has over $300 billion invested in fossil fuels, and is one of the top investors in coal, which is particularly destabilising for the climate. Climate destruction is already increasing the length and severity of heat waves, hurricanes, and wildfires, among other hazardous effects.

Locally, Vanguard is a major investor in industries releasing both greenhouse gases and dangerous chemicals over communities like Chester, where people face deadly health problems as a result. In April, EQAT led a 40-mile walk from Chester to Vanguard’s Malvern headquarters to dramatise the connection between Vanguard’s investment strategy and the effect on human lives.

“Like pollution, heat waves affect everyone, but they don’t affect everyone equally,” noted EQAT campaign director Eileen Flanagan. “People who can’t afford air conditioning, those who work outside, and the elderly are among those for whom this heat wave is life-threatening. We need to face the fact that heat crises will continue to worsen if companies like Vanguard don’t become much better stewards.”

Although Vanguard has joined the Net Zero Asset Managers Initiative, its interim goals are among the least ambitious of its peers. In fact, Vanguard was rated zero out of 30 on a recent scorecard ranking 30 major asset managers on their climate commitments.

EQAT was founded in 2010 by Delaware Valley Quakers who felt a moral imperative to address the climate crisis through nonviolent direct action, including tactics like civil disobedience. It now includes people of various beliefs and ages, united in a commitment to creating a just and sustainable economy for all. As part of the global Vanguard S.O.S. campaign, EQAT is urging Vanguard to use its considerable power as a shareholder to push the companies in its portfolio to dramatically reduce greenhouse gas emissions. If they don’t, Vanguard should move its investments. 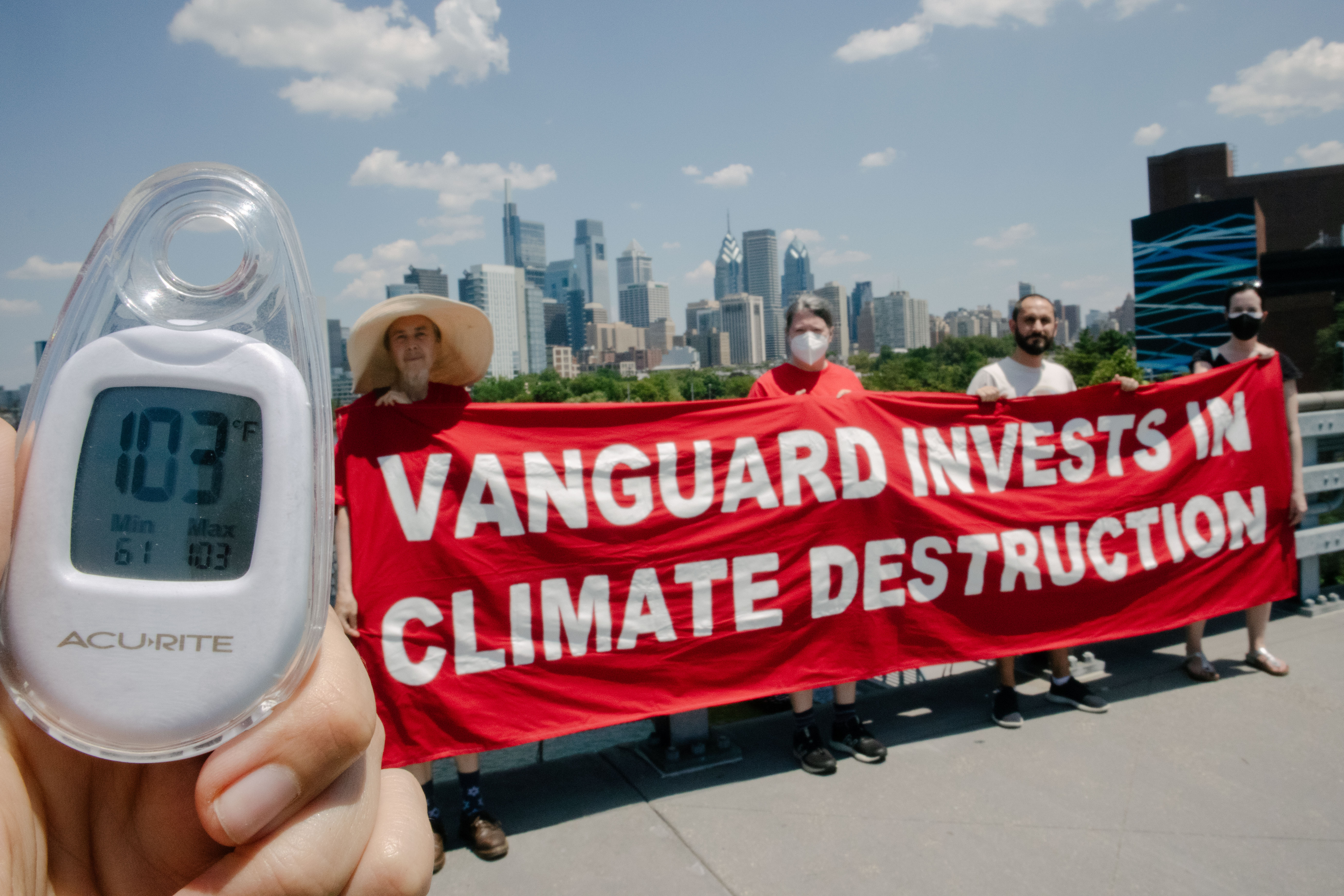 The letter to Vanguard CEO and full list of signers can be found here:
https://drive.google.com/file/d/1TOXwWA0YXYbF_GoRkMlhV4PTqvs5e0Ik/view

The detailed explanation of the solutions the Vanguard S.O.S. campaign is calling for can be seen here:
https://vanguard-sos.org/wp-content/uploads/2022/04/VanguardSOS-Demands.pdf