It was chilly and damp when we left the house for an action at Vanguard’s headquarters in Malvern. Having my wife Amy as company helped ease my nervousness that everything would go well. I had signed on as action lead only a few weeks before. The planning team had done most of the hard advance work and my role as action lead was like that of a director of a play, making sure that all the people played their roles and that the props, signs, and PA system functioned as intended.

Our goal in this action was to illuminate the role that Vanguard’s global investment choices have on places near and far. For example, their investments place local frontline communities like Chester, PA in the direct line of harmful plumes of pollution and the bonds that Vanguard buys fund the destruction of Indigenous people’s lands in the Peruvian Amazon and fishing villages on the Peruvian coast.

When I arrived, EQAT’s Campaign Organizers, Lina and Berenice, Director of Organizing, Ryan, and Director of Strategy and Partnerships, Eileen, were already on site. Seeing them and knowing that I had their full support made me feel calm. Our plan was to take the group from our parking lot meeting place to block the crosswalk at Vanguard’s entrance. As we began our prep, it was clear that this would be a well-attended action. With three vans of students from the George School led by Tom, our numbers swelled to about 130 folks. 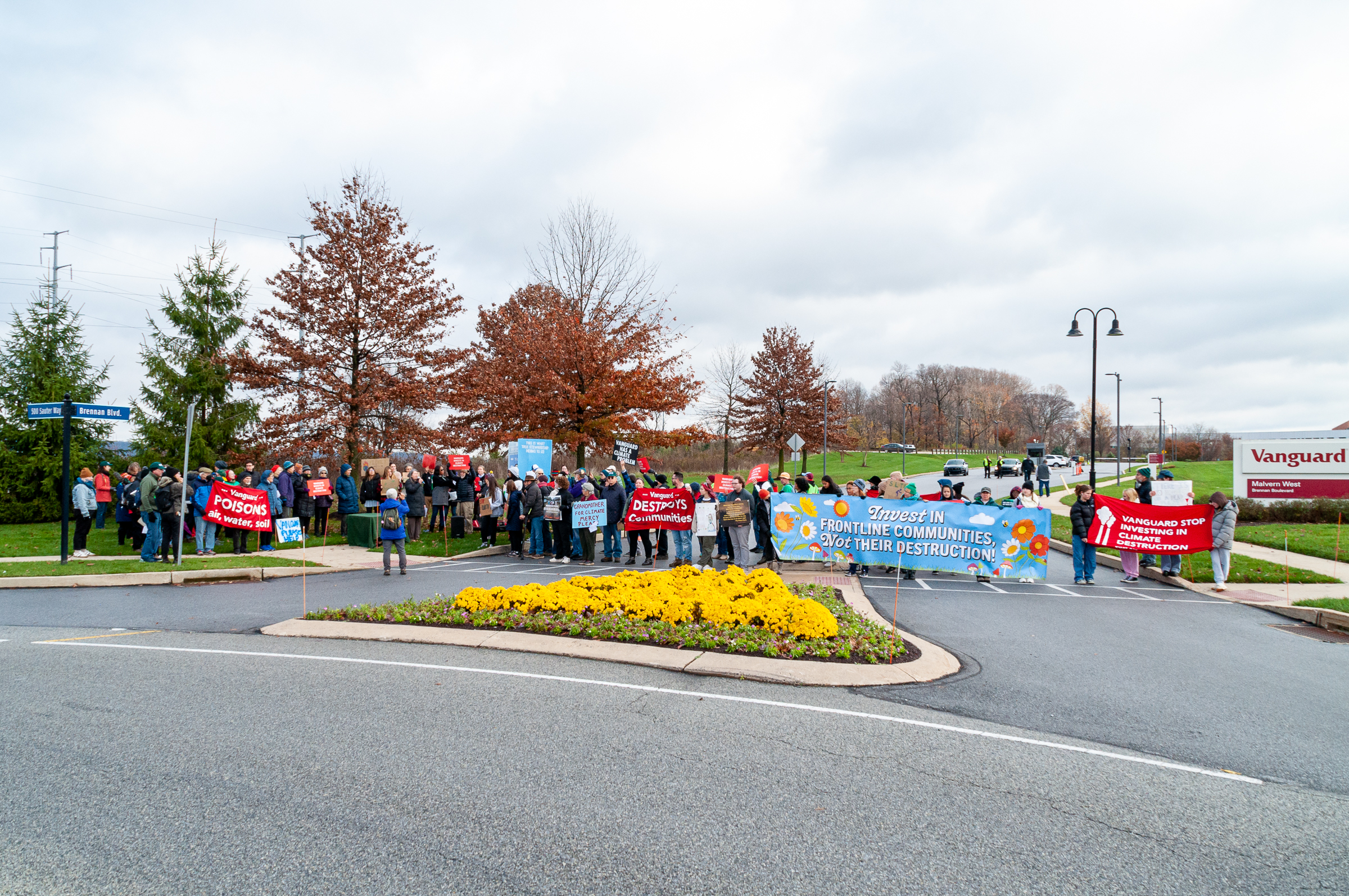 We headed confidently towards the crosswalk believing that we would be able to take it. Police liaison Michael informed me that the East Whiteland Township Police had closed the entire intersection. We wouldn’t have any problem placing our group where we wanted for maximum visual impact and our marshals Barb, Alice, Ben, Christy, and John guided us so that everyone was safe.

After we arrived, we spread out across the intersection. Two-thirds of the group set up in the crosswalk with banners and signs. The other third positioned themselves around and behind our speakers. Livestreamer/visuals lead Rachael made sure that we positioned the people and props to maximum effect and began livestreaming the event. 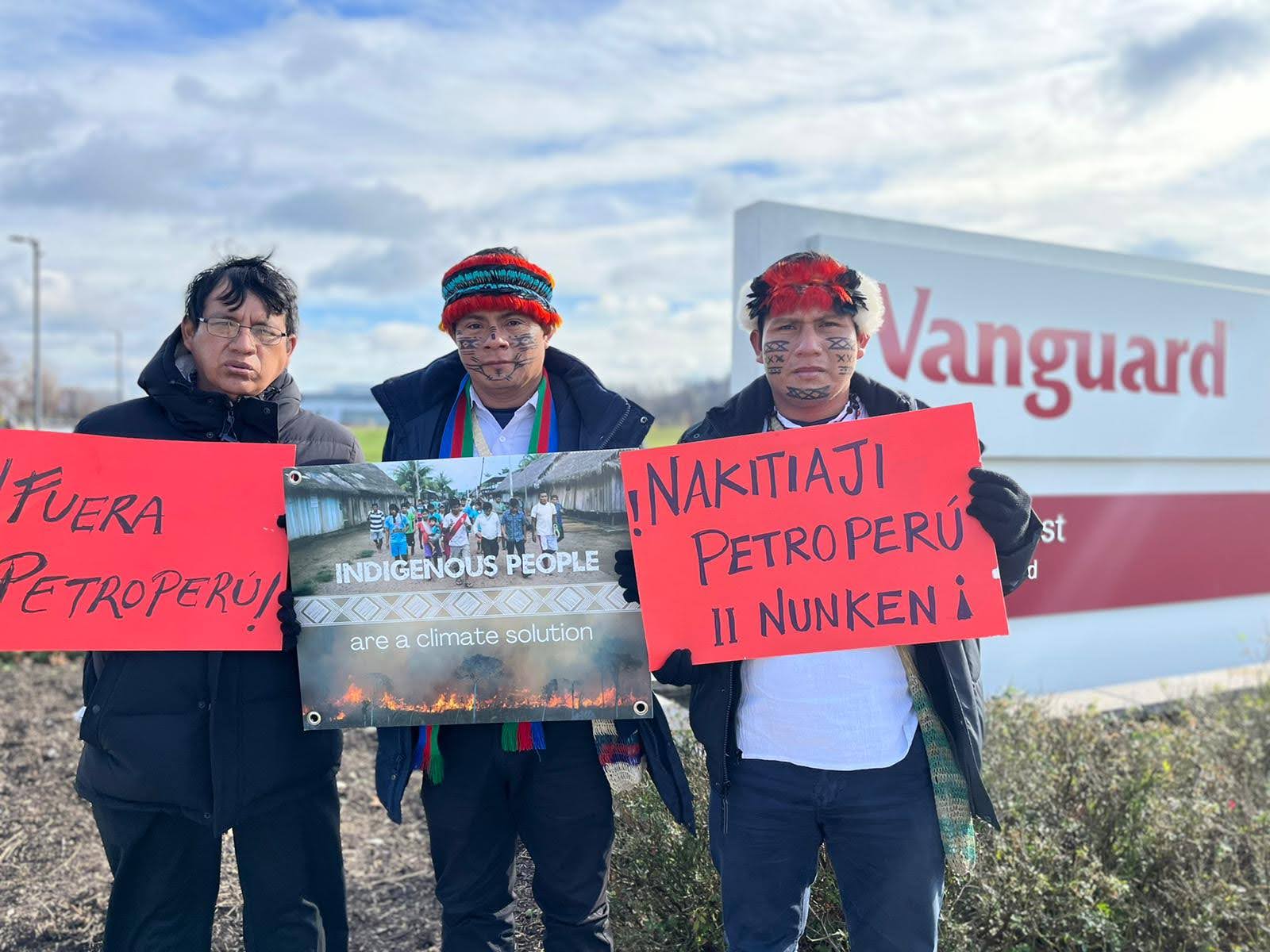 Listening to Carlos, Nayap, and Nelton, the delegation representing the Achuar and Wampís peoples of the Peruvian Amazon and small-scale fishermen of the Peruvian coast, was a very emotional experience for many of us. They explained how Petroperú, the Peruvian oil company that Vanguard funds, was destroying the land and water that their very lives depend on. A special thanks to Jo and Eileen, who helped keep two mics running so that interpreter Mary Day could translate our Peruvian friends’ messages. The young people in attendance seemed especially moved by the experience.

The sun had come out during the action and we left singing – taking pride that all the hard work, planning, and experience of both EQAT staff and volunteers had paid off that day. One of the guiding principles of EQAT is that we are on our learning edge. I was hesitant to take on the role of action lead at first because I hadn’t been to an action in a while and was late in joining this one. I am glad that I went outside of my comfort zone once again.