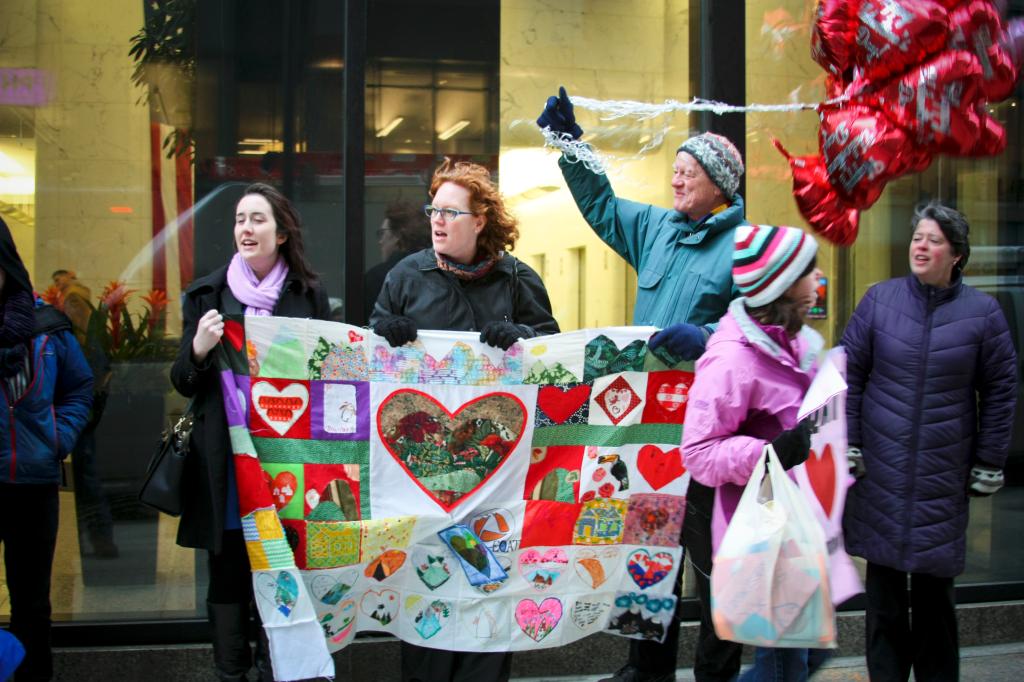 On Monday Feb 9, forty-two people, ranged in age from 8 to 86, participated in an action that invited each person to boldness. The participants carried Valentines and a quilt made from another hundred people, including Philadelphia school children and supporters from as far as California, Utah, and Georgia. Thanks to all who sent in quilt squares!

A small group tried to deliver the quilt to PNC regional president, Paula Fryland, as the larger group held them in prayer before joining outside the headquarters. When they were told that she was unwilling to meet with them or accept the gift, that group stayed in the lobby in Quaker worship, while the larger group outside sang songs rewritten for the occasion, including: “Stop! In the Name of Love” and “What’s Love Got to Do with It?” 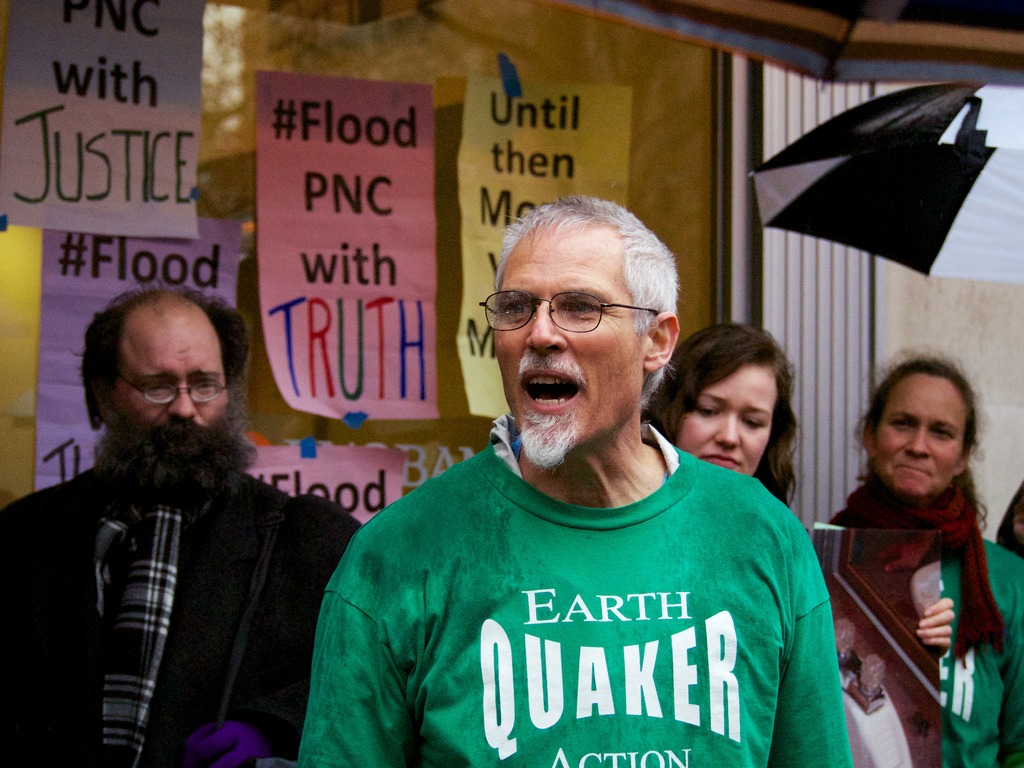 “We wanted to deliver this quilt to Ms. Fryland as further evidence of how many people around the country want this egregious practice to stop," said Ingrid Lakey. "We hoped she would take just a few minutes from her day to accept this token of love for the mountains from people young and old. Instead we were told by a PNC security official that the bank is in negotiations about their mountaintop removal policy. I promised that until that policy changes, we will keep coming back.”

On Saturday December 6, approximately 300 people participated in over 30 actions in 12 states and the District of Columbia to demand that PNC Bank stop financing companies engaged in mountaintop removal coal mining. Whether they were wearing shorts in Florida, parkas in Wisconsin, or holding umbrellas in Pennsylvania’s steady rain, they demonstrated their determination to end this destructive practice. Participants ranged in age from 1 to 87-years-old with eleven pairs of parents and children. There were several account closings, including two Quaker congregations. 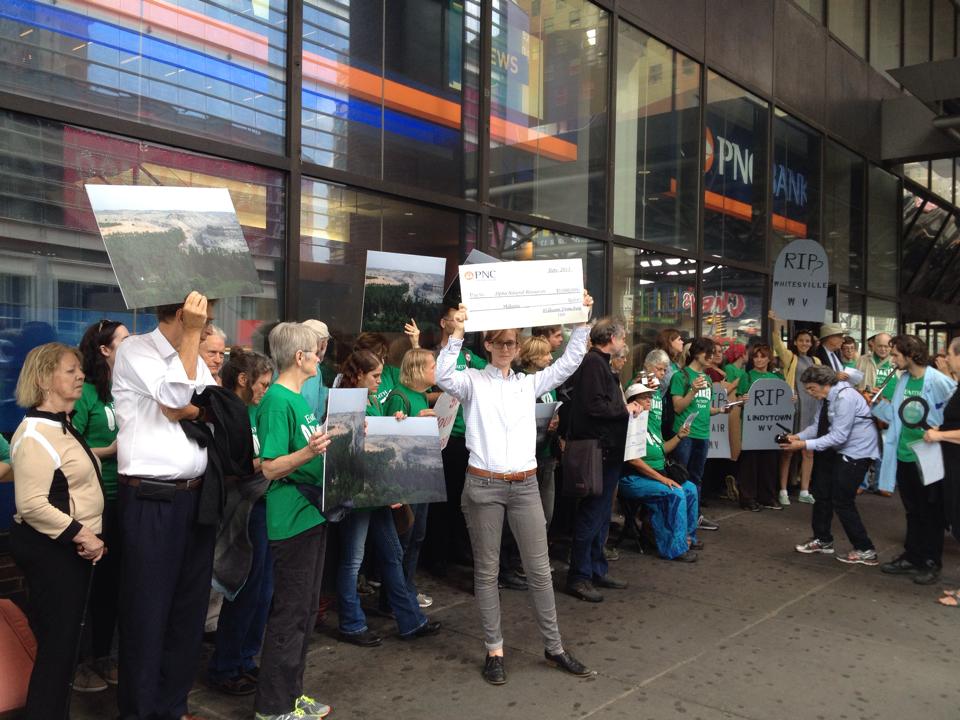 On Monday September 8, members of Earth Quaker Action Team and Climate First joined with allies from across the country in support of The Alliance for Appalachia’s week-long Our Water, Our Future, gathering in Washington, D.C. The 35 activists were locked out of the Dupont Circle branch of PNC Bank. 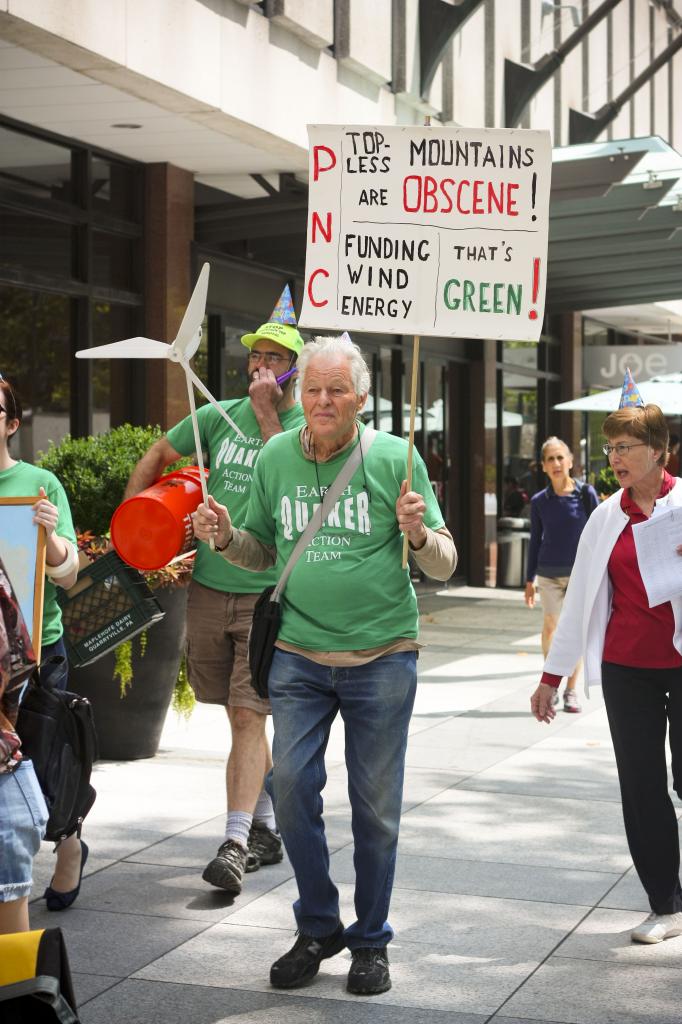 Celebrating with the UBS Hands Off Appalachia campaign with the news that UBS bank is backing away from mountaintop removal coal mining, Earth Quaker Action Team invite PNC to "join the party" in a nonviolent direct action at PNC's Rittenhouse Square branch.

Over 200 people joined EQAT for the action in Pittsburgh, many of whom were making their first nonviolent direct action. We covered 7 different bank locations. Many people made choices to respond to situations as they happened, making each action location unique, while the entire set of actions combined to hold PNC accountable for their continued financing of mountaintop removal coal mining.

Read some of the news coverage here. 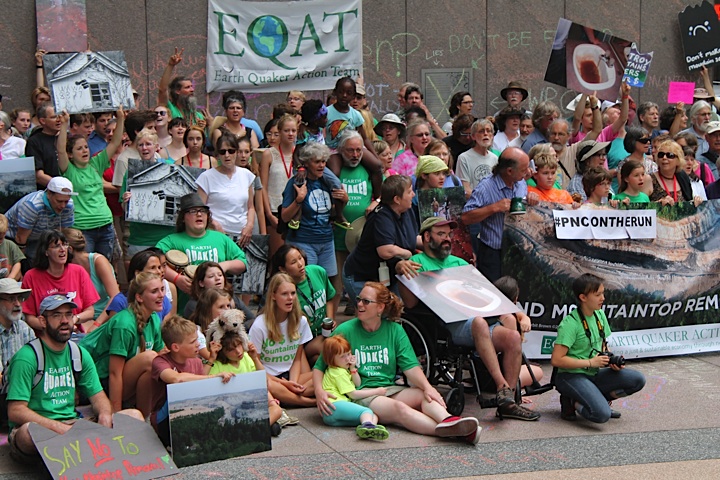 The weekend of May 23rd small teams of Earth Quakers spotlighted members of PNC's board in Philadelphia, New Jersey and Baltimore.

In 2014, PNC moved their shareholder meeting to the farthest corner of their bank footprint—to Tampa, Florida. Is PNC trying to run away from the Quakers, who are asking them to admit the truth about their less-than-green lending practices? The day before the meeting, EQAT held a press conference under PNC's "green" wall, on April 21 announcing that Quakers from all across the US would return to Pittsburgh in July in the case that PNC did not pass a full sector exclusion of mountaintop removal coal mining by June 1. On the day of the shareholder meeting, 22 Floridans and 6 Philadelphians held an action in Tampa making sure PNC had gotten the message.

Read some of the media coverage here.

On Monday, March 10th, after a request from the national movement against KXL, EQAT led an action with our allies at the Philadelphia Federal Building. As the formal community comment period on the Keystone XL pipeline decision comes to a close, activists targeted the corrupt process that produced the State Department’s bogus analysis claiming the pipeline would not cause any “signiﬁcant” climate damage. Close to 200 people at the federal building "swept out State Department corruption" with brooms and blocked the doors with our bodies. Twenty-nine courageous people were arrested for civil disobedience and released by the end of the day. More were prepared to do so.

Read some of the news coverage here.

As over 5,000 students gathered for Power Shift in Pittsburgh, the Earth Quaker Action Team held the biggest bank branch action in U.S. history to stop business as usual for PNC Bank. We did actions at 16 PNC branches, including most branches across the city of Pittsburgh. PNC locked us and customers outside at many branches. And at one branch, the bank had seven truth tellers arrested. Together with friends from Appalachia and many new allies, we said it was time to #shiftPNC and interrupt business as usual.

The action was covered by over 75 media outlets. Read some of the new coverage here.

EQAT members attended PNC’s annual shareholders’ meeting in Pittsburgh to ask each board member to end their support for mountaintop removal coal mining. Instead of standing up for human health and environmental protection, PNC executives rushed through their agenda and ended the meeting in mere 20 minutes to avoid answering our questions. We left the meeting signing, knowing PNC is now on the defense.

The action was covered by at least 40 news outlets. Read some of the news coverage  here.

After a training in memory of Larry Gibson, a brave and inspiring anti-mountaintop removal coal mining activist, EQATers bravely and creatively designed and carried out over 15 actions at different PNC Bank branches.

Students from Temple, University of Pennsylvania, Haverford, and Bryn Mawr gathered at a PNC Bank branch on UPenn's campus to have a fun, high-energy action while several people closed their PNC accounts.

Green Walk for Jobs and Justice

A walk, publicizing our Move Your Money initiative, departed from Philadelphia on April 30th, 2012, visited PNC Banks, Quaker Meetings, and other sympathetic congregations and organizations, and ended at PNC National Headquarters in Pittsburgh on May 16th, 2012. As we walked, we met new supporters, gained new allies, and made new friends, and demonstrated our commitment to getting PNC out of the business of environmental destruction.

Three Temple University students were arrested as they conducted a sit-in at a PNC Bank branch on Temple's campus. Temple allows PNC to provide banking services on campus, and when students were prevented from attending a meeting between the University Investment Committee and PNC officials on PNC's ethical banking policies, these brave students took direct action to show Temple administrators and PNC their committment to truly ethical banking and a more just world.

We built windmills inside the lobby of PNC Bank in Center City Philadelphia to show that we believe that PNC has alternatives. Instead of funding mountaintop removal coal mining, which provides few jobs and destroys the environment, PNC could choose to fund windmill construction, which has far less environmental impact, and provides many more job opportunities.

Occupy Philadelphia joined EQAT to demonstrate the disastrous effects of mountaintop removal on the economy, environment, and communities in Appalachia.

We joined PNC for their annual shareholders’ meeting. Even changing the location last minute didn’t faze us. We are happy to follow them anywhere to show them that funding mountaintop removal must stop immediately.

EQAT was privileged to join Swarthmore students and Reverend Billy. We filled the bank with our bodies and voices to insist that PNC take its money out of the destruction of mountains and human health.

The EQAT “Flower Crimes Division” roped off the PNC booth at the Philadelphia Flower Show, because although PNC sponsors a flower show in Philadelphia, PNC funds the destruction of flowers and entire ecosystems in Appalachia when they lend money to companies that practice mountaintop removal.